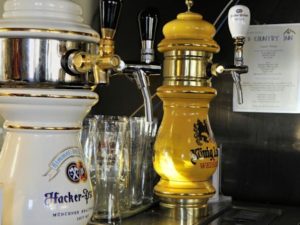 2008 Barb and Ernie semi-retire and take a three month trip from
London to Singapore.
2009 Barb and Ernie’s oldest son, Thomas, buys Barb and Ernie’s
Restaurant.
2011 Barb and Ernie retire – Chris Morris is with us for thirty years.
First “Eat for the Cause” Fundraiser on Canada Day raises over
$5000 for the Red Cross.
2012 Interior Renovations begin
2013 Our White Night Fay Reid, sadly passes away (see 1985).
2019  Closed in July for a two week trip to Germany with
Chris and her husband Kieth (no kids).
2020  COVID 19 pandemic shuts the world down and then begins almost
two years of closures, reopening with restrictions and more.
2022  We are still here thanks to you!! .

THANK YOU EDMONTON for supporting your local businesses!!

Looking forward to seeing you in ’22!